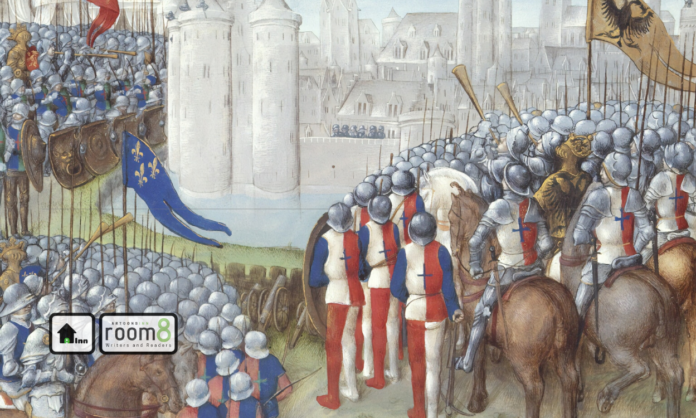 ‘Arrgh! Lazy dullards,’ muttered Mrs. Week. ‘Bickering, eating, sleeping, the whole lot of ‘em. Born we’re peasants and die such,’ she complained. ‘Such hopes I have for ‘em,’ she rued, shaking her head, ‘The King ‘ll rule and we’ll till.’ She turned to her husband and said, ‘Listen here mister…’

The seven lads – aged eighteen to eleven – stared aghast at the door that had shut, moments ago, on their face. They couldn’t believe that their parents had kicked them out and told them to go to the forest to gather wood and berries for the winter.

‘‘Tis so unfair, I tell ya,’ grumbled Second, as he set his basket down at dusk.  His whole body ached. The others nodded in agreement, united for the first time in the face of travesty. Despite working hard, from dawn to dusk, neither was a single basket full nor was there a decent stack of firewood.

‘Not many pickings here. ‘Morrow, we go deeper into the forest,’ said First.

This was followed by more grumbles. But finally, everyone calmed down, ate the food their mother had packed and slept for the night. It wasn’t difficult, for they had never been this tired in their entire life.

Next day, they moved deeper into the forest, where the pickings were better. The fast filling baskets and piles of firewood gave them a sense of pride. It also made them appreciate everything their parents did.

On the fifth moon, as they were settling in, they heard voices. Surprised and scared, they cautiously proceeded to investigate. What they saw horrified them. At the edge of the forest – where started the kingdom of King Julian, their arch enemy – was a large gathering of his army.

They realized, that their King needed to be warned. It was a unanimous decision. Sixth and Seventh would go post-haste to the Palace. Afterall they were superb runners, seeing as they had to flee their mother’s beatings for stealing bits of precious food to feed the dogs and ducks.

Once they had informed the guards, the whole Palace whipped into frenzied activity. Soldiers dressed in their blue and red uniforms. The horses were saddled. Bows and arrows, lances and shields were hefted. The trumpet was blown.

The lads were shown to a grand room in the guest wing, with assurances that their brothers too would be escorted here, once they arrived.

Before leaving for war the King sent for the brothers.

‘What be your names lads?’ He demanded.

The King smiled. His search for names was finally over.

‘This shall come to pass, when we win this war,’ He declared, ‘In the new kingdom of Calendar, you’ll be known as the ‘Days of the Week’,’ He chuckled, ‘You’ll be the seven days.’

Previous articleIMAGINED REALITIES
Next articleCorona in the times of Mahabharata

Shweta Singh
Shweta Singh is passionate about books and food – both interests inherited from her father – and loves to write and travel at every opportunity. A closet writer, who after encouragement from friends and family has embarked on the journey of self-discovery.

Prologue I am but a vessel! Leaveth or Taketh from me, as you please. The choice is yours.  Don’t believe me? Read for yourself. Obsession  New York, 2000 Tired -...
Read more
Pandemic

Ramblings of a Teenage Mind

Oh God! I can’t do this. I need to get out. It’s been five days. I miss my friends. How long do I have...
Read more
Fable

It all started a few years ago. A pandemic had hit the world, followed by an economic recession. People started dying, some because of...
Read more
ArttrA

Narsimha stretched his hands and stood upright, wiped the beads of sweat as his skin dazzled in the scorching sun. Time was running out....
Read more
ArttrA

What’s in a name?

Aren’t we all cursed when we are named? Cursed, because each time our names roll out of our lips, impressions are formed, assumptions are...
Read more
- Advertisment -

Nisha was feeling ecstatic. Nothing made her happier than her early morning five-kilometer run. Today was extra special. She was back to running after...
Read more

The basement was dank and smelt of fear, a mixture of breath, sweat, and urine. It was too small for all of us to...
Read more