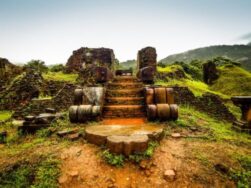 It was a clear night illuminated only by the glint of starlight and the radiance of a bright moon. The mighty river Mahanadi flowed over the pebbled riverbed, burbling and springing over the limestone rocks in its way. A temple of sandhara order stood silently on the riverbank. The moon shone over its white stone structures, quietly sleeping in the still hours of the night.

A lone figure was walking up the less traversed part of the bank towards the temple. The sturdily built physique and agile movement gave away his warrior identity, even without an armour. Up close, one could see the eyes of a hunter, framed in the passionless face of an executioner. Judiciously searching someone. The one who summoned him here in the dead of night.

Earlier this evening the letter arrived from an unknown source. A short message in perfect Urdu, to meet the sender in front of Samaleshwari temple, alone. The writing was familiar, and he couldn’t refuse. Though he knew what he was thinking was impossible, but, a part of him wanted it to be true.

When he arrived, there was no one. Casually he caressed the wall of the temple and mused to himself, “Shine as much as you can today. Tomorrow I will demolish you to ashes like the others.”

-“ Only if you’re alive till then, Rajiv Lochan Roy.”

Someone hissed from behind. Then, without warning, plunged a sword all the way into his back, until the shiny metal had disappeared inside him.

With much ado, he turned to face the assassin.

“Akmal, you! You were my loyal general, ” the man exclaimed with much pain.

“ Not Akmal, I am Prakash. And my loyalty lies only with Rajan Mukuldev and I am going to avenge…”

But, he stopped mid-sentence. A swift blow had beheaded him mercilessly. And he was silent forever.

The fatally injured Rajiv Lochan, looked up to find the culprit, a woman with the bloody sword.

“Dulari Jaan !” He gasped, before fainting.

A few years ago

Samaleshwari Temple of Hirakhand region was gearing up for the imminent Nuakhai festival. Today, apart from visiting the Goddess, the crowd is excited about the presence of the chief Commander of the King, Rajiv Lochan Roy. The main architect of the victory against the army of Bengal Sultan. His bravery had even mesmerized the opponent ruler, who has invited him to be the esteemed guest of his Durbar, as a token of appreciation. Rajiv Lochan is leaving the kingdom today to honour that friendly gesture. And before that, he is visiting Samalei Maa, who has since time immemorial been an enshrined deity for the local people.

“ The Sultan is very cunning. Beware of any trap.” Was the advice of all well-wishers. But destiny had a different plan.

The unthinkable happened in Sultan’s durbar. The mighty Oriya Lion fell in love with the docile daughter of the Sultan, Dulari. It may have been a ploy of the Sultan, but, the two loved each other truly. Rajiv Lochan decided to marry her by converting her to Hinduism and reached Puri with that request. That was when hell broke loose.

A month later in palace of Sultan

-The King has no right to banish me from my motherland. Marrying of your choice is not a sin? How can he forget my sacrifices for his kingdom? Unfaithful swine.

Rajiv Lochan’s plea to convert Dulari to Hindu and marrying her was ridiculed by the orthodox priests of Puri in open court. They insulted his love with filthy comments and the Gajapati Mukunda Dev, his patron remained mum. He had stormed out of the court that day, sought refuge under the Sultan, embraced Islam, took up a new name Kalapahad and married Dulari in a haste. Once the news of his wedding reached the royals of Puri, the King declared him banished from the kingdom forever. Thus he was fuming now.

-“Let’s forget all this. At least we have each other”, Dulari tried to pacify his enraged husband.

-Forget? Never! The entire Hindu community will pay a hefty price for this injustice.

And thus began the history of destruction. In the years to come, he would lead the Sultanate army through the regions of Bengal ravaging all the temples and the Hindu idols on the path of his conquest, targeting Odisha in the end. Gajapati Mukundadev was defeated and killed in the battle. The name Kalapahad soon became synonymous with the ‘destroyer of Hinduism’.

He wreaked havoc on the Khirachora- Gopinath temple of Balasore, the Khiching temple of Mayurbhanj, the temples of Konark, which lost all its glory after the destruction. And marched up to Hirakhand. Blinded by the rage to destroy all traces of Hinduism Kalapahad set up his camp near Samaleswari Mandir, his erstwhile pilgrimage.

When Kalapahad regained his senses, he found himself lying in Dulari’s lap.

“How did you…” he tried to speak

“Shh, you’re hurt. Don’t talk much. I am here to relieve you of all agony. Drink this buttermilk. It will ease your pain”

He drank it obediently.

“ I waited every night for your return. I thought you’ll return once Gajapati died. But you were addicted to this game of demolition by then. Your hatred was for the King so why this savaging of temples? For whom are you ruining these?

“For us, for our love…” But excruciating pain seized his tongue and he started convulsing.

“ You gave me poison, Jaan! Then why did you kill Akmal?”

“Because only I have the right on your life. This game of destruction must stop now. You cannot punish another religion to grace our love.”

As the world around Kalapahad started getting darker, he saw Dulari drinking the residual buttermilk. With hope he closed his eyes. They will soon meet in a world, beyond the boundary of religion, caste and creed.

Previous articleCurse Absolved by Nature’s Boon
Next articleWHAT THE PECK!!!

Sreeparna Sen
Sreeparna Sen, a Banker by profession and a Computer Engineer by education, finds her solace in writing. Aspires to become a published author someday. When she is not poking her nose in the bank documents , you can mostly find her nose in a book or Facebook.

It all started a few years ago. A pandemic had hit the world, followed by an economic recession. People started dying, some because of...
Read more
Pandemic

March 2020 “There is no need to be panicky. Stay home and keep safe.” The chief minister's  speech was repeated on the news channel for the...
Read more
Fiction

Musings of a Little Girl

That colony had fifteen  houses set in a  square , one side of which was marked by a road that led to everywhere .——school,...
Read more
Crime

The large oak door was open, allowing the winter chill to seep into the house. Where was the butler? "This way, ma'am. Please, the Inspector...
Read more
Realistic Fiction

Our errand boy Gopal handed over a letter to me. "Sir, the postman brought this”, he said. It was an inland letter. “Who writes...
Read more
- Advertisment -

It was 4 am. Smoke billowed from the spout of the engine as the first train of the day chugged sleepily into the station....
Read more

The room was filled with a palpable chill, as time ebbed slowly as I looked down at my own body strapped onto the ventilator....
Read more

Tonight is the night of the blood moon. A Shaman had once told me these nights are marked for marvel. I peered among the branches,...
Read more