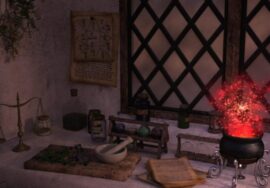 I was recognized as an alchemist rather than by my name Cleopatra- perhaps because it reminded people of the famous Egyptian queen.

Yuya was my indispensable associate; he was not a learned man, nevertheless a wise man. He assisted me in my lair, where I toiled day and night on several medications, and on ‘Chrysopoeia*’. A fantasy that all alchemists breathe, perish, and slaughter for- to transmute the stone into gold.

One day, I fortuitously dropped some concoction from my alembic* on a stone. It contained scarce and expensive ingredients. I would have been inconsolable, instead was awestruck when the stone disappeared. With a trembling hand, I held the invisible stone. It was the moment that I had long awaited. A breakthrough.

“Yuya! Yuya!” I shouted, with my heart palpitating.

“Yes?” The anticipation dripping from his monosyllable.

He held it between his two fingers as if it was a fragile glass. After a brief moment, he kept the stone on the slab. His face had lost its hue.

“You are not pleased?” Sensing from his silence something was wrong, I enquired.

“It can be misused.” His hesitation was evident in his words.

“And the Chyrospoeia cannot?” Bewildered, I asked.

For once, his principle seemed skewed. Clearly, he was hiding something.

“What is it, Yuya?” Putting my hand on his chest, I asked.

“The omen! This would be the downfall of…” he always had visions. Sooner or later, they all came true. I was concerned about what he had seen. I tried to stop him but he left the lair without finishing his sentence.

My heart asked me to follow him to profess my love for him, but my mind stopped me with its logic. It argued- when he would see what the potion could be used for, he would accept it and God-willing accept me as well.

My work beckoned me. The potion was still an archetype. It had to be made stable before I could test it to become invisible. For the next few days, I tried different permutation and combinations, tested the potion on a rodent and a cat, observed their behavior. Experiments were favorable and finally, I managed to create a concoction safe for human consumption, or so I believed.

Without thinking much, I quaffed it down standing before the mirror. Slowly I turned invisible. However, something happened that I had not anticipated. I fell unconscious.

Waking up to the sound of a hound’s howling, I looked at my limbs. Still invisible. Elated with my success, I marched to the street. It was dark, almost midnight. It dawned on me that I had been unconscious for a few hours.

The wind was blowing from the west that night. Men walked past by… none ogled at me like I was a piece of red meat. It felt liberating. I walked towards the port. Yayu and I lived in different worlds. I lived in the upper kingdom and he, in the lower kingdom. The port divided us in the night, but the same port brought us together in the morning.

Stepping onto the docks of a ready ship I embraced myself, as the breeze was getting colder and stiffer. I could have boarded the next ship meant for the royals, but I never cared for luxury- rather it made me nauseous. I never desired the best suite, the softest clothes, or the brightest jewelry to alleviate my self-esteem. The self-worth was in my mind, not in the materialistic possessions.

As the ship sailed, mind wandered.

Would my love last for a lifetime? And what about the afterlife? All those pharaohs still smelt in their tombs. Did they take everything with them to their afterlife? Their bodies laid in the extravagant pyramids with treasures. How difficult was it to comprehend that ‘after the game, the pawn and king go into the same box’?

I didn’t realize when the ship reached the other side- the lower kingdom that belonged to the peasants. Disembarking, I walked towards the hillock where Yuya lived. The Pharos (the lighthouse) shone behind me as I walked on the unconstructed road, leaving my footprints behind. However, in the darkness of the night, my footprints were as invisible as I.

There I was, standing outside his abode. Walking on tiptoes, I entered in. My heart was beating loud; I was scared Yuya would hear it before I could surprise him.

As I crossed the threshold of his humble abode. I heard his laughter; the laughter which made me fall for him. I walked into the inner chamber.

But my smile froze when I saw him… in the bed with a damsel. His fingers stroked her cheeks and his eyes looked at her the way they never looked at me. I felt betrayed. Something snapped inside me. Was it my trust?

In that moment of anger, I picked a knife from the fruit basket on the table and stabbed him.

Once again he could not finish his sentence. As he said those words, I realized that the sin of jealousy was accentuated by the power of invisibility, which made me commit the heinous crime.

I felt his black eyes looked into mine. Could he see me? Patting his reddish-brown hair, I put my right hand on his chest one last time.

Tossing the knife on the floor, I faltered out of his house. I sprinted to the port, hopped onto a ship, and managed to reach straight to the bathing area. The cold breeze strangely gave me hot flushes.

My heavy, wheezy breathing slowly turned into sobbing as I saw my hands turning visible. They were empty. Red. Bloodied. My tears fell on my hands. Would these tears be enough to wash them?

Alembic- A distiller that Cleopatra invented.

Priya Bajpai
Priya U Bajpai is a short story author and poet with several of her past work having been published in mainstream newspapers. This literature scholar is a versatile story-teller. She is adept at writing fast-paced and layered tales across genres.

I stand frozen, in time. The winter looms over  leaving my hypothermic heart red with frost-bites and— frozen…   The leafless branches crave  the forbidden fruit of  the forgotten past, as I shiver...
Read more
Drama

The rainforest is never quiet; filled with a chaotic buzz of insects and roars of animals. This forest never slept, someone somewhere was always...
Read more
Drama

I had always believed that women were responsible for every war in history. Looking at her, sitting on the throne with a grin, I...
Read more

Betty Cooper opened her eyes. The place was aglow in crimson hues. Dark Shadows of the ghastly fire danced in front of her eyes....
Read more
Fiction

“Cooper, please be a good boy today and do not stray away like last time.  Just stay with the herd. Okay?”  Mother rubbed her moist...
Read more
- Advertisment -

If the moon could be called romantic, then that night’s moon would be it. No hint of clouds in the sky, the stars were...
Read more

The basement was dank and smelt of fear, a mixture of breath, sweat, and urine. It was too small for all of us to...
Read more

Curse of the Cosmos

Once upon a time there lived a king named Kosm, to whom glory and might were kind. He ruled over a kingdom so vast...
Read more

Princess Ella and the Bonsai

The city of beauty, on a silvery moonlit night, witnesses its fading vistas as it lay crippled. Brimming with immense pain and impounding concern...
Read more