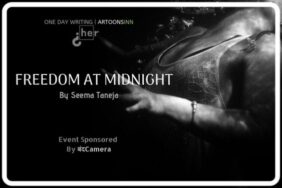 ‘Mom! Now who told you about that, Ryan?’ James was exasperated at the boy’s never ending questions. Damn! the sci-fi movies he’s so fond of!

‘’Dad, I was rummaging through the documents in the study for some homework and I found this old photograph. ‘Baby’s first day out with Mom’, it says. What’s a Mom, Dad? Why don’t we have them now?’’

‘You’re too young to know all this, Ryan…go to your room now’, James shouted.

How do I explain to him now what women are? Wish Dad was here but he had to rush to help the brother with the kids. He punched a few buttons angrily. The stench from the washer was nauseating. Dinner was yet to be made. He couldn’t let the kid go to bed hungry.

They stared in disbelief as the spacecraft zoomed out of sight in the fraction of a second. They were gone. All of them. The irritating, annoying, nagging, jabbering women.

The aliens had been fuming as they watched the earthlings – the lesser mortals – demean, berate, rape and kill their women with impunity. The gentle creatures-the ones with the higher intelligence had to be protected.

The cells were put in the right place. Bodies protested at the intrusion but complied. Procreation was taken care of.

The babies had to be tended, fed, cleaned, put to sleep. House chores to be done. Money to be earned. With half the population suddenly vanishing, consumerism had taken a hit, work opportunities diminished. Intense fights broke out at the slightest provocation.

They longed for a soothing touch, a gentle caress, a love note.

Freedom was now an ugly word.

**We appreciate your rating the story out of 10 at Writers and Readers’ Room | ArtoonsInn. This story is an entry for the one day event, HER, co – sponsored by BandCamera.

BandCamera : Here is BEER for you – A short film with 10% ALCOHOLIC content. It will surely give you a kick at the end.

Do share it with your sober and not-so-drunk friends.
Drive safe.

Seema Taneja
Seema Taneja is a former teacher of English. She expresses herself through fiction and poetry in English and Hindi. She also writes on matters concerning politics, economics, gender and lifestyle issues. Photography is her other love.

Don't worry ma, you take father to the hospital. I will transfer money tonight itself', Sumana assured her. She picked up her phone and gave...
Read more
Beaks Club

She stood by the window and watched them. The playground reverberated with the exuberant chatter and laughter of her children. They had just finished...
Read more
Drama

The wails, the pleadings for mercy followed her. The devilish laughter of the man, as he beat and pulled the woman inside, still reverberated...
Read more

Once upon a time, there lived little children in a castle surrounded by the enchanted woods.   It is believed that Cooper and his family were...
Read more
Fable

Betty Cooper opened her eyes. The place was aglow in crimson hues. Dark Shadows of the ghastly fire danced in front of her eyes....
Read more
- Advertisment -

Trapped in a Lie

Shanti gazed at the distant gleam of sunshine in the garden beyond, from the confines of her small shaggy prison cell. The bars stood...
Read more

London,  June 1880. The summer sun played around gaily with the honeysuckles and the forget-me-nots. The lilac cornflowers seemed to dance around in the warm...
Read more