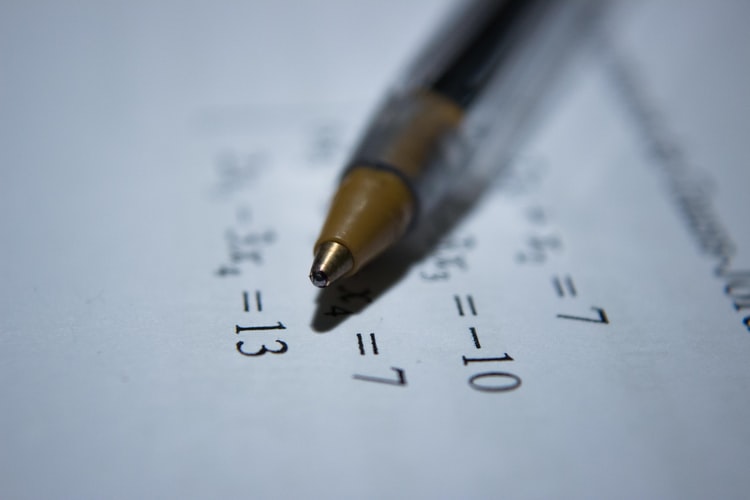 ‘If the age of the mother is five times more than thrice the age of the uncle, whose age is seven times that of his son………,’ Sumi’s head went ‘Whirr……’ upon reading this. Saurabh’s daft expression further triggered her blood pressure.

“Why the hell are you gawking at me? The answer is not on my face. You have to solve the problem to get the ages of all these bloo……” She bit her tongue.

The mother-son duo was in a fix.  Though they were aware that one of them was ‘x’ years old to start with, they were unsure which one among these plethora of relatives was that guy.

As they arrived on a mutual consensus to make the uncle ‘x’ years old, the doorbell rang.

“Your father is back from work. You better get everyone’s age while I fix some tea and snacks for him.” Sumi threw a derisive glance at the bewildered boy.

Upon opening the door, Sumi caught her husband, Pramod, with the kind of expression that she recognized as a premonition.

He handed over a massive bag of fruits and some snacks that fortified her premonition theory.

“Sumi…” he dragged a bit.  “You know my colleague, Avinash, from Delhi. He has some project in our branch for a week. He is arriving in a while with his mother-in-law…”

“What?”Sumi interrupted. “You mean a storm in the form of two guests is coming to pummel our home.”

Pramod selected his words to justify his move. “Since Avinash’s wife has gone to the US officially, he had to bring her mother along. She can’t be left alone in Delhi, you see because she has just recuperated from knee surgery.”

All arguments like why both of them cannot stay in the guesthouse that the company must have provided or why she couldn’t have been left behind with a close relative; were otiose.  Sumi had learned this lesson that altercations didn’t work when Pramod had already made the plan.

However, Sumi made a spontaneous decision to at least show some resentment, though she knew her situation was akin to a soldier fighting a losing battle.

“Do you know Saurabh is having his Mathematics examination in five days?  Our son has selective dementia. He conveniently forgets the methods to solve the problems.”

She hurriedly went inside and fetched the Mathematics book.

“Here, look, we have to find ages of all twelve members in a family, given the ages of only two of them. Worst things happen in another chapter.” She turned the pages frantically.  “x and y pair up with z and some p and q pair up with r, and two or more of them get lost. We have to keep searching them and find their values.” She wiped the sweat out of her forehead.

“Do you have any idea that I have to first study all this before teaching him?  Thanks to his tutor who chose this month to get married.” She hurried to her son’s room and gave him back the book.

Sumi’s ranting did not affect Pramod, nor did it bring any changes in the guests’ program.

Having exhausted her energy in futile efforts, Sumi got back to help Saurabh find the vagabond r that kept pairing up in a triad with p and q sometimes and with s and t at other times.

The age issue in the other chapter had yet to be sorted out. For the time being, that was laid to rest.

‘All my chalked out plans to solve these mystifying mathematical problems have been messed up because of a philanthropic husband, who thinks bringing home guests during exams is a cool idea,’ muttering all the way, Sumi went to answer the doorbell that heralded the arrival of Avinash and his mother-in-law.

When you genuinely are in no mood to usher in some guests, it becomes an arduous task to force a welcoming smile on your face. Sumi was facing this very issue when she opened the door.

Sumi had heard from Pramod that Avinash’s mother-in-law was not too old, maybe a sexagenarian.  She had hoped that the lady would lend a helping hand in the kitchen. But a look at the behemoth figure standing next to Avinash crushed all her hopes.

“Some tea?”  Pramod asked, ignoring Sumi’s admonishing glances. Then a tea session followed, with hardly an hour left for dinner.

Excusing herself, Sumi went in as she heard Saurabh desperately beckoning her. He was still struggling with the r.

Finding no vent to release her anger that had soared manifold, Sumi awarded a tight slap to Saurabh. The boy’s howls reverberated in the whole house.

“Our son is having his Mathematics examination in five days. Sumi is worried because he is a bit weak in the subject, and to add to our woes, his tutor is on leave.”   Pramod tried to explain the reason behind the uproar.

“Which class is he in?”Avinash’s mother-in-law enquired. She looked concerned at the way the boy was crying.

“Seventh standard. Mathematics has become pretty different than what I used to learn in school. I am not able to contribute much towards Saurabh’s coaching.” Pramod uttered words in self-defense.

The lady smiled. “Don’t worry about his preparations. I will make him thorough with all the chapters in these five days. I can assure you that he will do well. There is no point in reprimanding him. That would only end up befuddling the child more.”

Avinash stepped in and explained. “She is a retired Mathematics teacher. With her vast experience of three decades and versatile teaching methods, I am sure she will help your son gain much confidence and help him do well in his Mathematics examination.”

Sumi, who walked in to pick up the empty teacups, was overwhelmed to hear this.

Pramod followed Sumi into the kitchen, under the pretext of carrying the snacks tray.

“Not all storms come to disrupt your life, some come to clear your path.” He nudged her playfully and winked.

The Best
1
The Best

Green it
2
Green it