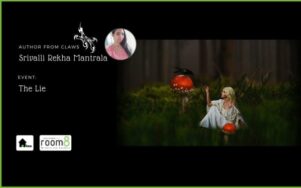 Bloomland sparkled in the warmth of the golden sun. Tiny wings glittered, darting from flower to another. Preparations for Autumnal Equinox were in full swing. After offering their gratitude to Goddess Khloris, the faeries would follow the Queen into the Enchantè forest. Udumbara would bloom again, bringing prosperity to their kingdom for another 3000 years.

“Milady, Mother Oseca has arrived,” Amili informed the Queen, who was surveying the arrangements.

Queen Melissa was delighted and rushed to meet her. Mother Oseca was a revered healer in the Faerie World. Melissa curtsied to a tiny faerie with platinum wings. “Bless me, Mother Oseca.”

“May Goddess Khloris be with you.”

“Thank you for joining the celebrations.” Melissa beamed at her.

“I had to come, Melissa. Do you know the history of Udumbara?” Her tone held an urgency to it.

The question confused her. “The holy flower can be touched only by the Queen. She has to place it in the Pistil tower in the center of the kingdom to ward off evil.”

“And, the Queen should be a descendant of the crown.” Mother Oseca added, “You can’t touch the flower, Melissa.”

“What!” She was dumbstruck.

“I apologize for this, but I had no choice. You were adopted when the Queen’s child turned out to be different. Faeries who cannot control their magic are dangerous, as you know.”

“Yes. When the Queen couldn’t have another child, she decided to make you, the daughter of her maid, her heiress.”

Melissa wanted to scream and deny the truth. Mother Oseca was lying. She had to be. But, Mother Oseca never uttered a false word. Why would she?

Melissa gasped as the truth sunk in. “Xeni is in the thorny chambers. Does she… know?”

Melissa slumped into a chair. The revelation crushed her heart. She’d been playing the role of a Queen when the rightful descendant was getting her magic nullified in the thorny chamber. How did she let it happen? Why didn’t Xeni say a word? She swallowed the lump in her throat. She blinked back the tears as the words of her mother echoed. A Queen should be in control of her emotions.

She squared her shoulders. “I will step down.”

Melissa was unable to face her sister. How could she? “Xeni, I’m so sorry. I wasn’t aware.”

“You can’t do that!” Xeni was alarmed.

Mother Oseca spoke, silencing them both. “Melissa, do what your heart says.”

The news shocked the faeries. The deafening silence shattered when Amili bowed to Melissa. “You will always be our Queen.”

Other faeries cheered their acceptance. They knew Melissa was capable and kind-hearted. Xeni clapped in relief. She knew her limitations. Mother Oseca smiled. The faeries loved their Queen. Melissa said nothing. Her entire life was a lie.

This is an entry for #TheLie #Five00-8, a room8 writing event –in 500 words.
Check out the event guidelines here: https://writers.artoonsinn.com/room8/thelie

Room8 appreciates your rating the story out of 10 in the comments.

Srivalli Rekha
Srivalli Rekha is a blogger, writer, nature lover, passionate cook, an amateur photographer who cannot live without reading books and good music. Her stories are featured in Sweek Flash Fiction Book(2018), Tales From the Cliff Anthology (2018) and 72 Hours of Insanity: Anthology of the Games Volume IV (2018).

The cool breeze tickled my skin. Something warm spread over my face as I turned to my side. The distant rustle of leaves reached...
Read more
Fantasy

Emeralds, ambers, and sapphires sparkle in pairs. Scintillating shimmer loops around us, weaving this way and that. A purr follows a buzz. A suppressed...
Read more
Guest

It all started a few years ago. A pandemic had hit the world, followed by an economic recession. People started dying, some because of...
Read more
ArttrA

Now  She stretched her hands and stood upright, wiped the beads of sweat as her skin dazzled in the scorching sun. Time was running out....
Read more
Five00-9

Adare, County Limerick  2020 “Something 'bout this photograph takes me back in time,” said the retiring Inspector. He was looking down at the contents of his...
Read more
- Advertisment -

"Come in, Amara." He gestured for me to step inside. The man did not look like a servant, but he wasn't the owner either. I...
Read more

My name is Mango, Alphonso a.k.a hapuz Mango. I grew up here in the back yard, owned by an old couple, by the edge...
Read more

And the Rest Becomes History.

And The Rest Becomes History Disclaimer: The story is a work of the writer's overactive imagination. Liberties were taken. However the writer assures you that...
Read more

Madhya Pradesh 1979 “Saab ji1,” said Mangal Das saluting as soon as he alighted from the jeep, “We have a location.” Finally! “What do we do Saabji?...
Read more