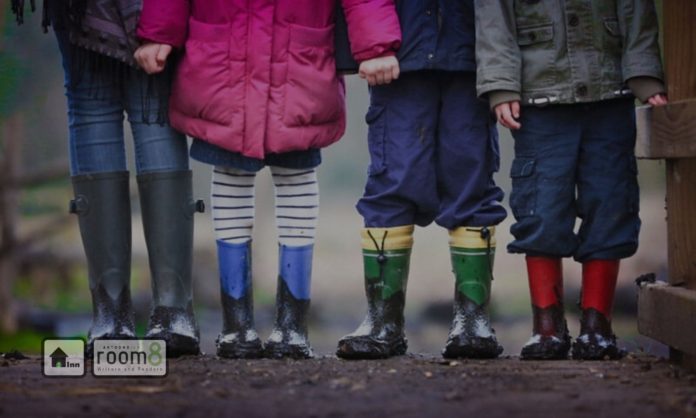 Zaheer ran to the farthest corner of the vast football ground. His tiny feet loved to feel the grass and he enjoyed the freedom of running without restrictions.

“Catch me ma’am!” He shouted. It was a beautiful spring afternoon, with soothing sunlight and warm breeze.

I tried to catch him in spite of the pain in my heels but he was too fast. It was impossible for me to keep pace with a six-year-old. Saanvi and Vihaan danced in front of me but escaped when I tried  to catch them. The affectionate Kavin inched closer. I lifted him off the ground with a twirl, hugged him before I set him down again. Diksha, Pehal and the other girls ran towards me for their turns of twirl and hug. Zaheer was still in a dilemma whether to move close and have the hug or stay away victorious.

“Shall we have a group picture taken?” One sentence from me made them all pile up around me like puppies on a dog. “Children, I said we are posing for a picture.”

“But I want to stand next to you.”

“Shhhh! Don’t you know the big children are having exams? Don’t shout. You all stand around me, within touching distance!”

I touched each one of them on their shoulders to assure they are within the desired territory and we got our picture for the last day clicked.

“Can we run once more, please ma’am?” They asked.

Before I could reply, my phone rang and as I was about to answer it, I silenced them saying, “I think it is the Principal, she is gonna scold us for making noise.”

I gestured to my co-teacher to mind the class.

It was my son’s call. Why was he calling me during school time?

“Amma, I’m home, somebody has tested positive for Covid19 in my school. I may have it as well.” He cut the call. My hands were shivering.

I felt dizzy. What if I had the infection too? I got paranoid at the very thought of how I played with my students and what if I had transmitted the virus to all of them!

I called my son back to give him instructions. I heard a cough.“Novel corona virus….!”*

I heard the awareness message for the first time. Terrific timing. Struggling to arrange my children in a single line, I trudged back to the classroom. I sent them all for a hand wash. My co-teacher offered me water and told me to relax.

“I heard akkas talking in the washroom.”

We hadn’t told them yet that the graduation celebration was cancelled, as the government had ordered all Kindergarten classes to be suspended from the very next day. That was the first shock I had received earlier in the day.

“It is home time now, take your bags children.”

Other teachers who passed by my class peeped in to check if the news of the confirmed case in my son’s school was true. I was not sure but just told them that my son was safe at home.

Back at home, I checked on my son frantically.

He had fun watching me go crazy. I picked his uniform up with a stick and did some stunt to stuff it into the washing machine. But there was no water. It had to remain unwashed for the rest of the day.

Messages flew in various WhatsApp groups and the whole world knew about it before the press presented the heavily garnished hot news cooked to freak everyone out.

By seven in the evening I received the message I dreaded the most in the apartment’s WhatsApp group. “Is any child from our society studying in that school?”

I didn’t know if I had to I respond. To add to my dismay, my son was the only student from our apartment attending that school. I realised I didn’t have the contact numbers of any of his classmate’s parents. I asked him to check with his friends about the development of the situation. Oblivious to all this he was hooked to his phone.  I wasn’t sure if we had to get ourselves tested.

I tried calling my husband, “cough, cough, the novel corona….”*

‘I’m in a meeting, will call you later’ he pinged.

The world was crashing down on me and yet he was too busy to hear that. With no strength to hold it all to myself, I broke the news to my curious neighbours in the apartment’s WhatsApp group. By then my son’s school clarified that it was not a student who’d tested positive. Rather it was a parent.  I sent a leave notification to my workplace and stayed home, checking on my son way too often for any symptoms during the next few days.

After a couple of weeks, I returned to my school. I enjoyed the attention while everyone checked on me as if I had fought the infection and won over it. I sat in the empty classroom sorting out a few worksheets. I placed them all around me within touching distance similar to how my students would sit around me. I imagined Kavin the timid one close to me and the naughty Diksha, a little further away.  Diksha would pick a fight with me saying, “you never let me sit with you!”

“Because Kavin doesn’t shout in the class!” would be my response.

I imagined her frowning at me and shout, “Go ma’am, I never shout.”

An akka who had just entered the class for dusting thought I had lost it when she saw me laughing to myself.

Until that day when such conversations become a reality again, I pray for my darlings to stay safe.

* This is the statutory corona awareness message we hear instead of a caller tune when we call someone on the phone.

The chimes of a horse drawn carriage woke Philip up announcing the arrival of a resplendent dawn. He peeped through the window. A teenage...
Read more
PoAttic-1

The million dew drops  glittering on the grass  chase away the stars  to twilight yonder.   The early morning light struggles to penetrate  through the blanket of fog  the city is tucked...
Read more
Fiction

River Merced plummets down the rocky hill, day and night disrupting my meditation.  The squirrels scamper around collecting cones, tickling my body with every move. The...
Read more

“Hello, Sohini Madam?” “Yes, speaking. Who is it?” “Madam, this is Sameer from Big basket. I had brought your order.” “Oh yes, I have been expecting you....
Read more
Pandemic

When the wave arrived, it was gentle in its coming. The gentleness left one unprepared for what was to come. A being in its...
Read more
- Advertisment -

‘Come and sit here, next to me.’ The teenage boy who boarded the bus at M G Road looked in the direction of the tremulous...
Read more

Confessions of a Terror Victim

I always felt as if you were judging me mama, the pupils of your eyes following me like hissing snakes across the room. You...
Read more

The bus screeches to a halt. A few people manage to get out without shouting out swear words. One of them is Devendra. He...
Read more

"Mai*, have mercy." They all wail in despair.  Water water everywhere, not a drop to drink….I hum the tune like a haunting lullaby. My thunderous...
Read more

That dumb-ass husband of hers sat quiet, hidden from view. While she stood there, out in the open… lecherous eyes, lecherous grins bore through...
Read more