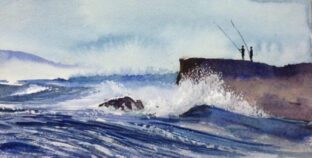 “Patience is the key.” The wise man taught. We nodded, adjusting the stained piece of rough cloth across the hips. This was a new phenomenon; having to wrap a cloth as a symbol of decency to hide our body.

The strangely dressed men and women became regular visitors in the past few years. Some wrinkled their noses and left after taking pictures. While the others gave us books, insisting it was salvation.

“Our lives are ours. Let them come and go.” The wise man advised. I agreed with him. He taught me a lot of things. I learned to walk like a saint, to speak like a poet, and to be composed as the earth. I was his favorite student.

“How long do we stand here?” My friend’s voice brought me back to the cliff top. I said nothing.

The sapphire waves crashed. Milky foam rose above the dark rocks, frothing like fresh snow. The sky was pale, a lighter shade of aquamarine curtained by mist. On the grayish black cliff, we stood holding a pole each. He fidgeted, unused to the process.

“How long?” He asked louder this time.

Adjusting the stake in my hands, I sighed. “As long as it takes.” It was a murmur. Despite the crashing tide, he could hear me.

He nodded, trying to rein his impatience. A movement caught my eye. With one swing of the arm, I cast the pole. My friend tried to mimic me swinging his arm a bit too wide. Shaking my head, I showed again. This time he got it right.

My approval made him smile. The hint of nervousness in his eyes reminded me of the time I cast my first fishing pole. It was more than three years ago. The wise man himself walked to this spot to teach me. It was a blessing not many received.

“I can’t feel anything. Did I lose the fish?” My friend asked in a voice laced with anguish. I shrugged. It happened all the time. The fishes were no fools to take bait immediately. One needed the skill to become a great fisherman like me.

“I will not lose hope.” He gritted his teeth, taking a step closer to the edge.

“Under your guidance, your friend will reach new heights. He has the potential to bring name and fame to our land. He will do us proud.” The wise man told me in the morning. I silently bowed to his feet and walked away.

“The tide is high. This is the right time.” I repeated more to myself. It all depended on what happened in the next few minutes. Giving my pole a gentle tug, I stared at the closing mist. Our skinny coal frames stood out for others to see.

Some days were worse than the other. But, I always caught fish when most of the older men returned empty handed. Some did not return. It was a part of our life.

“The storm is closing in.” My friend gulped. He was afraid. Failing on the first day was a bad omen.

“He has the blessings of Nature. He won’t fail.” The wise man’s words echoed in my head. I just didn’t tell my friend that, yet.

Suddenly he gasped, taking three steps forward, his arms and back straining against the force that was tugging at the end of his pole.

He nodded bending halfway, the salt water burning his eyes. His feet dug into the earth, trying to pull the prize from under the rising tide.

“Help!” It was a plea I shouldn’t refuse. He needed me. Putting away my empty stake, I stepped beside him, gripping his stake with both hands. We pulled inch by inch feeling the string strain under the weight. At least one of us wouldn’t go back home empty-handed.

“Woo…” He whistled. It came out as a throaty rasp. The fish was over the surface. The mist loomed overhead, taunting and threatening to drown us.

“Pull faster.” We used all our strength. In one swift motion, we had it over the cliff. The fish landed with a soft thud on the moist earth. We were wet from the spraying of the sea waves. The rain began, lashing at us in full force.

“This is…” Words failed him. With eyes wide as the full moon, he looked at me. The rain formed a barrier between us, around us, shielding us from the eyes that never slept. It was a good omen.

He laughed heady with excitement. “I caught the biggest fish! I did it!”

He bent to pick up the fish and staggered. The drenched earth was slippery. One step, two steps; he slid. I stretched forward, grabbing the fish with both hands. It was needed for our survival.

My friend wobbled trying to find his footing. It was not easy. He lost his balance and fell backward into the raging sea. I stood unmoving, staring as the waves swallowed his body. The minutes ticked by. My arms hurt from clutching the big fish to my chest for long.

Placing it on the sloppy earth, I moved to the edge of the cliff. Going down on my knees, I bowed to the sky above and the sea below. The dead were supposed to be honored. His body was buried in Nature’s lap. His soul would reach the heights as predicted.

The wise man would know what happened. He would understand. I needed to go back. My friend’s family had to grieve. Standing, I picked up the fish again. With one last bow for the departed, I turned away, not looking back.

Lightning struck, followed by rumbling thunder. I walked slowly, as the storm raged around me. It was time to play the part of a heartbroken friend in mourning.

Srivalli Rekhahttp://#
Srivalli Rekha is a blogger, writer, nature lover, passionate cook, an amateur photographer who cannot live without reading books and good music. Her stories are featured in Sweek Flash Fiction Book(2018), Tales From the Cliff Anthology (2018) and 72 Hours of Insanity: Anthology of the Games Volume IV (2018).

Emeralds, ambers, and sapphires sparkle in pairs. Scintillating shimmer loops around us, weaving this way and that. A purr follows a buzz. A suppressed...
Read more
Fiction

Bloomland sparkled in the warmth of the golden sun. Tiny wings glittered, darting from flower to another. Preparations for Autumnal Equinox were in full...
Read more
Guest

For Binky and Junior

I slumbered for ages, hidden from the living. Alas! They discovered me. They woke me and enslaved me. I became a mere tool in...
Read more
Drama

As I set my paws in the vast expanse of land, I felt free. I jumped and roared to my heart’s delight. Was it...
Read more
Drama

The inferno darted its multiple tongues back and forth, greedily licking off every speck of life in its path.      How long had it been? I...
Read more
- Advertisment -

Mirror On The Wall

Despite its calm exterior, its temperature was actually steadily rising. Within no time, it was steaming, sputtering, spilling out with a vicious rage at...
Read more

No Place to Hide

The game was on. Akansha had started to count.  It was her turn to seek and our turn to hide. We, the children of...
Read more

Radhamani quickened her steps. The sun was yet to rise, and planet Venus was still shining. In the silence of early morning, she could hear...
Read more

Emeralds, ambers, and sapphires sparkle in pairs. Scintillating shimmer loops around us, weaving this way and that. A purr follows a buzz. A suppressed...
Read more

I have been confined to this court room for almost a decade now. Earlier I used to travel a lot along with my master...
Read more