The Love Letter That was never Read 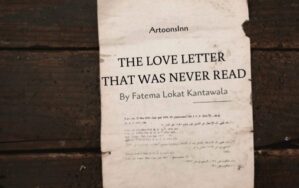 The Love Letter That was never Read.

The story of Fiona and Anand.

Fiona and Anand met in grade 12 at the tution classes. Both were studying science and both wanted to pursue medicine. From acquaintances to friends, six months passed and they both were very happy in each other’s company.

They both had introduced each other to their families as well.

Soon the exams were nearing and the atmosphere was pretty stressed. The exams came and entrance for medical exam also was over and they both were confident about the results.

Fiona and Anand had been drawn closer to each other, but they had never confessed or shown anything each of them felt. They shared a beautiful bond where they stood between being friends and to be lovers.

Fiona`s birthday was approaching, her parents thought of surprising her after the hustle bustle of exams. They invited close family, friends and Anand`s family.

By 5 pm guest started coming, seeing Anand and his family she was thrilled. She was happy with the new beginnings coming her way.

The dads got into conversation to know each other.

Anand`s dad looked around the simplicity and told Fiona`s father isn’t your house too small to nurture big dreams for your daughter. This made Fiona`s dad unresponsive for a second. He yet smiled and said,” Her dreams are precious. My house may be small but my home has a lot to give.”

That evening changed everything.

Fiona removed the letter she had written for Anand, she had confessed her love for him in the first love letter she ever wrote.

She tore in to tatters to the last bit of it and let it go in the darkness of sky.

Fiona and Anand erased the past.

Life began as Friends once again as Doctors.

ArtoonsInn Watchers: We’d much appreciate you giving your review and rating(0-10) in the comments.

Check out Arjun Rana, the co-sponsor of this event (Failed to deliver)’s book here –

It was the early nineteenth century and a huge country with abundant resources was being colonised by the merchants, in phases. Another ship arrived...
Read more
Fiction

"You did not even respond to my birthday wishes on Facebook, Ryan. We haven't spoken in the last 2.5 years, I know, but you...
Read more
Drama

Kshitij and Shonali were Geologists went for 2 day trekking trip with friends in mountain forests. Excited to explore new adventure, they reached the...
Read more

Dinner grew cold on the dining table, as she sat trying to knit a cardigan out of the clump of red wool in her...
Read more
ArttrA-4

It was the morning of her birthday, and Sandhya woke up with a song on her lips. Birthdays were jubilant occasions in Sandhya's books,...
Read more
ArttrA-4

Vibrant yellow dandelions blanketed the landscape around the pond.The evening Sun was refusing to descend. Aleksi stood there on the pier reminiscing those moments...
Read more
- Advertisment -

“Kariim..” Her voice trailed with the fading lights of the day. He wasn’t coming back. Swallowing the huge lump in her throat, she started the...
Read more

A knock on the door was what triggered off the chain of events. Anika was clearing the loft, poised delicately on a seven-foot-high ladder....
Read more

10 am, February 2003. New York, District Court. “All rise for the Honourable Judge Richards.” At the bailiff’s announcement, all rose.  Judge Richards sat, perched a...
Read more

"Mai*, have mercy." They all wail in despair.  Water water everywhere, not a drop to drink….I hum the tune like a haunting lullaby. My thunderous...
Read more

That dumb-ass husband of hers sat quiet, hidden from view. While she stood there, out in the open… lecherous eyes, lecherous grins bore through...
Read more