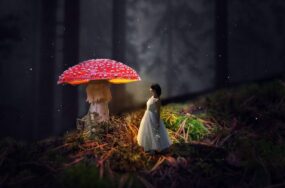 To say the place was a mess would be an understatement. Ruthlessly crushed petals of varied colors lay on the grass. The broken stalks, limping leaves, seemed to cry for help. Her unwillingness to accept the situation added to the torture of seeing her subjects hiding in fear and agony.

“They are afraid, milady,” Amili murmured, her head bowed.

Melissa knew the reason. She dreaded knowing, for it meant she could no longer pretend everything was perfect in Bloomland. As a Queen, it was her duty to provide safety to the faeries. The sight of terrified faeries was too much to bear. She could see the unspoken accusation in their wide purple eyes. Some of their wings were ripped beyond repair.

Melissa understood what her maid was telling her. What is a faerie without magic? Vulnerable. Weak.

She flew back to her flower castle with Amili following behind. It was one of the few undamaged flowers in the kingdom. If the cause of the destruction was an enemy, the Queen would have grounded them to dust by now. Alas, it was someone close to her heart who was wreaking havoc in innocence.

“Her intentions aren’t to cause harm.” Melissa sighed.

As usual, there was no response from Amili. She made her stance clear without crossing the limits of hierarchy. Her loyalties lay with the ordinary faeries in the kingdom. The incidents were occurring far too frequently to ignore.

“Alright. When the sky turns golden, I’ll announce my verdict.”

Amili bowed and hesitated before stepping out.

“Sometimes there is no happy choice, milady, only one less grievous than the others.”

The petals closed softly as Amili flew into the night. Her home was destroyed, but she refused to stay back in the flower castle. The memories with her innocent sister haunted Melissa as she floated in the confines of the flower. For the first time in her life, she regretted the gift of the throne. The dawn came too soon. The streaks of red, gold, and orange in the pale blue sky failed to comfort her.

Pushing open the petals, she flew to a nearby flower that was a replica of her castle. “Xeni…”

A faerie poked her head from inside, her eyes bleak. “Melissa…”

“I order for you to leave for the thorny chamber. Your powers will be nullified forever.” Melissa managed not to choke on the words.

Xeni whimpered and flew away after giving Melissa a tight hug. The thorny chamber was an asylum for faeries who went eccentric when they couldn’t handle the power of magic. Sadly Xeni was one of those faeries. Melissa hoped Xeni would learn to control herself, but it hasn’t happened. It seldom did.

Amili arrived to see her Queen wipe her tears.

Squaring her shoulders, Melissa announced. “I’ve done my duty. Now, it’s time to get this place back in order.”

The Queen chose her subjects over her sister.

The above story is an entry into #TheChoice a Five00 entry.
Check out event guidelines here: https://writers.artoonsinn.com/five00-6/

Srivalli Rekhahttp://#
Srivalli Rekha is a blogger, writer, nature lover, passionate cook, an amateur photographer who cannot live without reading books and good music. Her stories are featured in Sweek Flash Fiction Book(2018), Tales From the Cliff Anthology (2018) and 72 Hours of Insanity: Anthology of the Games Volume IV (2018).

Emeralds, ambers, and sapphires sparkle in pairs. Scintillating shimmer loops around us, weaving this way and that. A purr follows a buzz. A suppressed...
Read more
Fiction

Bloomland sparkled in the warmth of the golden sun. Tiny wings glittered, darting from flower to another. Preparations for Autumnal Equinox were in full...
Read more
Guest

Once upon a time, there lived little children in a castle surrounded by the enchanted woods.   It is believed that Cooper and his family were...
Read more
Fable

Betty Cooper opened her eyes. The place was aglow in crimson hues. Dark Shadows of the ghastly fire danced in front of her eyes....
Read more
- Advertisment -

The room was filled with a palpable chill, as time ebbed slowly as I looked down at my own body strapped onto the ventilator....
Read more

It was heartrending to see dad lying in a semiconscious state with several tubes stuck to his fragile body.  An extremely soft natured man; he...
Read more

Curse of the Cosmos

Once upon a time there lived a king named Kosm, to whom glory and might were kind. He ruled over a kingdom so vast...
Read more

The sun’s rays beamed through the window pane over Kartik’s sleepy face. He blinked and rolled over as his body refused to get out...
Read more

'I've a question, Dad', 'Again!' James spoke through clenched teeth, irritated. 'Dad, do I have a Mom?' 'Mom! Now who told you about that, Ryan?' James was...
Read more