Life in a Fairytale

by srivalli 4 years ago3 years ago

~Listen to me while you read?~

My legs hurt from standing, but I had a job to do. Oh! The prince was riding on a horse sans the shining armor. Thank God, I’m allergic to metals.

“Can you drop me home, prince?” I gave him my sweetest smile.

He lifted me onto the beast wrinkling his nose.

“I know I stink. I helped granny bury the bad wolf that attacked her.” I explained folding my red cape. It could trip the horse if left open.

The prince was looking at me like I had two heads. “You killed a wolf!”

I shrugged. I could defend myself, thank you very much.

As we rode, he told me some nonsense about kissing a sleeping princess to wake her up. Did he have no manners?

“You are not supposed to kiss anyone without permission,” I warn him.

He sighed, his shoulders dropping. The poor fellow wanted an adventure.

I suggested the beanstalk cheer him up.

With a flick of his wrists, we galloped to the center of flower valley. Tying the horse to an oak tree, we climbed up in the thick creeper with him at my heels.

Sweat trickled down my hair. Ugh!

We stopped to wipe our faces with the fluffy clouds. I felt a little better.

Gesturing for him to be silent, I sneaked him into the stardust castle. Ugh! Why do castles have winding staircases?

At last, we reached the topmost floor.

The princess stood ready waiting for us. Wincing at her glare, I nudged the bestowed prince into the room.

“What took you so long? The witch will be back soon.” She hissed.

“What about the giant?” The prince asked. He had to understand that fairy tales don’t follow books. It’s the other way round.

The princess replied plaiting her hair. “I took care of the giant. The witch escaped cursing me to stay here until a prince arrived.”

“I’ll slay her for you.” The prince pulled out his new glittering sword.

I rolled my eyes. Why was the royalty so dramatic?

A shrill laugh made us jump.

The princess pushed us towards the door. “The Wicked Witch of the West is back. We have to get out of here. Move fast.”

Tripping over our feet, we rushed outside the castle. The stars cheered.

“You cannot escape!” The witch shrieked.

The prince fought and killed her in less than a minute. The stars flew away in relief as the castle crumbled.

But, the beanstalk; it wasn’t there. The witch made it disappear.

The princess solved our problem. She let us use her hair. I climbed down first. The prince followed, as usual.

But the princess was still up there. The prince and I held my cape for her. I knew it would come handy one day.

She jumped. The prince fell to the ground. He shifted to his knee and begged her to marry him. Man, he was pathetic!

My stomach rumbled. I tapped my red shoes thrice and went home.

I galloped across the vast lands searching for a fairytale of my own. Months passed. I found none until an old lady told me about a princess who was cursed to sleep. I wanted to wake her by kissing and then marry her. 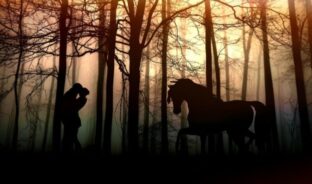 Right in the middle of a forest, a little girl in a flowing red cape gestured for me to stop. She wanted me to drop her home, her legs must be aching.

Bowled over by her sweet smile, I lifted her onto the horse. Eww! Doesn’t she take a bath?

“I know, prince. A wolf attacked. I helped granny bury his body.” She replied folding that cape.

What? A kid along with an old lady defended themselves? Wow!

She shrugged like it was no big deal. If even little girls don’t need a prince, what will happen to us? Oh right! I still have that sleeping princess.

I told the little girl about my adventure. She glared at me. “You cannot go kissing others without permission.”

Damn! What was I supposed to do then? I sighed. All I wanted was an adventure. Why was it so difficult?

“Don’t worry. We can climb up the beanstalk.” The girl chirped. Now, that’s something.

We were huffing and sweating by the time we reached the top. The clouds were softer than velvet as we wiped our faces.

“Shhh!” She hissed unnecessarily, as we crept into the castle made of stardust.

I followed her through the never-ending staircase to reach the tower room. The door was opened by the most beautiful woman I ever laid my eyes on.

“How long do I have to wait? Let’s go before the witch arrives.” The amber-eyed princess glared.

My head reeled. “What happened to the giant?” The little girl snorted.

“I handled him. The silly witch cursed me that I couldn’t step out without a prince.” The princess tossed her long hair.

I pulled out my sword. “I’ll keep you safe.”

Did the little girl roll her eyes? Brat.

Before my princess could reply, a wicked laugh filled the room.

“It’s the Wicked Witch of the West. We have to get out of here.” The princess dragged us out of the castle. Her hair almost tripped us.

“You can’t escape!” The witch yelled flying towards us. I lunged at her. My sword did the rest of the job. Her cry of pain shook the castle. The stars flew away leaving the dust behind.

The beanstalk was no longer there! My princess let her hair down. The girl climbed down first. I closed my eyes and held the red cape for my princess to jump.
Huff! She was heavier than I presumed. I saw the little girl vanish as I declared my love to the princess.

Once upon a fairytale

Once upon a time, there was a prince who loved to read fairy tales. He wanted an adventure and went in search of a damsel in distress.

One summer day, an old lady told him about a princess who was cursed to sleep for eternity. The prince galloped through the forest and came to a halt when a little girl gestured for him to stop.

“Can you drop me home, prince?” She smiled at him.

“Come on.” He lifted her onto the horse and wrinkled his nose at the smell.

“I stink. I helped granny bury the wolf we killed.” She replied casually folding her red cape.

The prince stared at her. “You killed a wolf?”

She nodded. “One hit on the head.”

Impressed, he told her his plan to wake up a princess by kissing her.

She frowned. “It’s bad manners to kiss someone without their permission.”

The prince sighed. He knew she was right. But, he wanted a fairytale story for himself.

“Let’s go to the beanstalk then. You can defeat the giant who lives in the clouds.” The girl suggested.

They raced over the vast land to reach the center of a flower valley. Tying the horse to an oak tree, he climbed up the stalk with the girl leading the way. Heaving from exertion, they wiped the sweat of their faces with the fluffy clouds.

“Shh…” The girl pressed a finger to her lips.

They crept into a marvelous castle made of stardust. The girl took him through the winding staircase to reach a tower room. The prince was stunned to see the most beautiful female waiting for them.

“What took you so long? We don’t have time to waste. The witch will return soon.” She asked hands on her hips.

“Witch? What happened to the giant?” The prince looked bewildered.

The princess grimaced plaiting her long hair. “I dealt with him. I couldn’t kill the witch because she flew away after cursing me that I cannot escape without a prince.”

“I’ll slay her for you.” The prince announced pulling out his glittering sword.

The little girl rolled her eyes. Before the princess could reply, shrill laughter echoed outside the window.

“The Wicked Witch of the West! She’s back. We have to get out of here. Now.” The princess hissed. The trio ran out of the castle tripping over their feet.

The witch was furious to see them escape. She threw her broom to stop them. “You cannot run away.”

The prince lunged and killed her in an instant. Her shriek crumbled the castle. The stars flew away in relief. But, the beanstalk vanished. The witch destroyed it beforehand.

“We’ll use my hair.” The princess said.

The prince and the little girl climbed down and held the red cape for the princess to jump.

Tapping her red shoes thrice, the little girl vanished as the prince tried to convince the princess to marry him. She was hungry and late for supper.