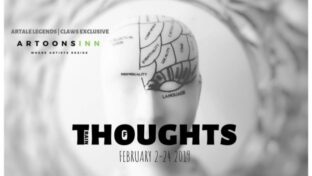 Prompt: Use ‘Stream of Consciousness’ as a narrative device to pen a story.

Definition: In literary criticism, stream of consciousness is a narrative mode or method that attempts “to depict the multitudinous thoughts and feelings which pass through the mind” of a narrator.

NOTE: Though the event is exclusive for only the Claws Club members of ArtoonsInn, everybody is invited to write. Entries from non-club members will be considered as guest entries.

–>Participants accused of plagiarism will be removed from the ArtoonsInn community.