About Radhika: Radhika Roy is a Private Investigator who starts her own agency – Radhika Roy Intelligence Bureau, after having had a bitter experience and quitting the CBI. However, she still has a friend or two within the Police Force who’d be willing to lend her a hand. She also has ‘enemies’ who are either skeptical or jealous of her and hate her guts.
Her age ranges between 35-45; is unmarried and living alone with a German Shepherd, self-trained, for company.
Based in Delhi, she manages to nab the criminals across the country, if needed.
Her father is dead but her mother lives in an old age home.
She has pollen allergy, hates cats and has a sixth finger on her left hand.
She has Grey-ish cat eyes that rarely miss a thing.
Her sharp nose is pierced on the right side studded with a diamond (gift from father).
Her height gives her a considerable advantage without using the fancy sandals other women like.
With the help of regular workouts, she maintains a healthy body and decent physique. 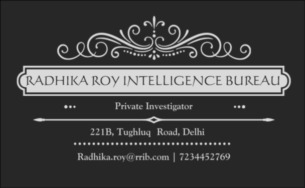 She has a mixed lineage. Her Father is a Bengali while her Mother is a Malayali. Her father used to work for Indian Government, and you know what is synonymous with Government jobs? Yes, you’re right, Transfers. Radhika studied in Kolkata, Chennai, Hyderabad, Bangalore, Pune, Chandigarh and finally Delhi. Travelling a lot since her childhood gave her an opportunity to interact with people from various regions, she is a Polyglot, and she speaks fluently in English, Bengali, Malayalam, Telugu, Tamil and Hindi; while she can understand Kannada, Marathi and Punjabi.

As a batch topper in her Police Academy training, Radhika is a perfect shot. She owns two licensed guns (Walther P22 Target & Ruger Blackhawk .44 magnum). Her German shepherd is named after her favorite singer Rafi (Ruffy).