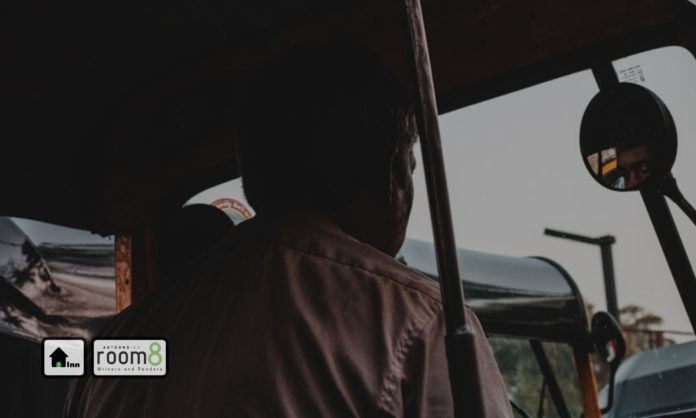 Chandu splashed some water on his face. He felt hot and flustered. Beset by a sudden spell of coughing, he clutched his gamcha to his face before spitting out a wad of phlegm. His cough was worsening. Of late, he had been feeling more tired too.

The city was reeling under the onslaught of the mahamari. On the radio they said that there was no cure. People were dying in hoards. The Prime Minister had advised everyone to stay indoors. He had begged that people maintain social distancing. Consequently, there were hardly any pedestrians and there were no passengers to ferry in Chandu’s auto-rickshaw. The people who ventured out scurried like rats and balked at the prospect of physical proximity with another human. Everyone was scared.

Chandu was scared too. He knew he should stay home. His wife and infant son had been sick for the past week with high fever. But, he could not tend to them, not without earning some money first.

Last night, the Chief Minister had announced a lockdown on the city. Public transport was shut. But, some auto rickshaws had to ply. What if someone needed transportation in an emergency? When the auto rickshaw union had called for volunteers, Chandu had stepped forward.

The little money that he had saved up had long since been consumed. He needed to earn some before day end. There was milk and medicine to be bought.

But, he had little chance of succeeding in the wake of absent passengers.

His wife lay prone on the charpai. The baby, next to her was crying. But, she seemed oblivious as if in a drunken stupor.

“Savita,” he shook her. She moaned in delirium.

He picked his son up. The infant was hot to the touch. His breathing was shallow, each inhale a laboured rasp.

“Savita…Savita…” he shook her with more urgency. Groggily, she came awake, her eyes blood shot and bleary. “The baby…there is something wrong. We have to go to the dawakhana – NOW. Get up.”

Savita mumbled incoherently, attempted to get up but fell back again. Chandu felt her forehead. She was burning up.

“Mai,” he mumbled and hauled her up. Cradling the baby in the nook of an arm and supporting his wife with the other, he made for the rickshaw parked some distance away.

There were a few people near the dawakhana. But, the shutter was down.

“Dawakhana is shut,” a man coughing into a rag informed him. “Doctor has been deputed to the Municipal Hospital.”

“But…that is fifteen kilometres away,” Chandu said dismayed, looking at his infant son. His voice broke, “Isn’t there anyone else to give medicine? My child will die.”

The man shrugged and staggered away. He wasn’t concerned.

Chandu’s shoulders sagged. His entire body throbbed as he bore his wife’s weight to support her. But, in spite of that Savita’s legs gave way. She sank to the ground, too depleted to stand even with support.  “Take the baby and go to the hospital. Leave me,” she mumbled.

“No, I’ll take you both,” said Chandu as he bent down and hoisted her up. Supporting her head on his shoulder, he led her back to the rickshaw. The effort drenched him in sweat. He wheezed. As he mopped at the beads of sweat at his forehead, he thought, ‘What’s wrong with me? Why do I feel so hot?’

The OPD was crammed full of people in various stages of sickness. Some were coughing uncontrollably while others lay on the floor, curled up, too sick to move. A few sat propped against walls, waiting to be attended to. The few hospital staff scattered among them looked tired and irritable. They ended up snapping at those who clutched at their clothing or worse still accosted them. The PDA blared announcements that got swallowed by the cacophonous buzz. It was difficult to get a word in edgewise.

The heat was oppressive. It was worse inside than outside. His throat felt scratchy and he was parched. The lack of oxygen, probably due to the swirling mass of patients, made him feel dizzy and nauseous. But, he could not afford to feel weak. Not right now. His family needed urgent help.

Spying a nurse by an information kiosk, he gulped a fortifying breath and all but dragged Savita as he elbowed his way there. The kiosk was surrounded by people clamouring for the hapless nurse’s attention. Chandu jostled his way through.

“Sister…” he yelled to be heard above the din, “sister, please…my baby is sick. My wife is sick. Please, help.”

“Wait your turn,” the sister replied without looking at him. Her voice, coming from under her mask, was lost in the racket.

“I told you na, wait your turn,” she snapped, finally looking at him. “I’m busy. Either wait or get lost.”

Chandu’s eyes pleaded with the nurse but she had already looked away to scream at someone, “Don’t touch that. Move back.”

The baby’s ragged breathing had quietened. He seemed unusually quiet and limp in Chandu’s arms. Chandu looked at the infant. His pallor had a tinge…was it blue?

“Babu…babu…,” he called out as he shook him. The child remained unresponsive. Savita, slumped against the kiosk frame, seemed hardly to be breathing herself. Her face seemed ashen.

“Mai,” Chandu prayed and nudged Savita. She slid to the floor. Had she blacked out?

Fatigued and frustrated at his inability to do anything, a hoarse cry escaped him. Helpless, he held his son as he stood next to his wife and sobbed. Before long, his knees too buckled. As he stumbled, he tried to clutch at something for support. His hand closed around the kiosk frame.

The last thing he heard, before he too succumbed to perpetual oblivion, was the nurse yelling, “Don’t touch.”

Author’s note – In the wake of Covid -19, there are many families like Chandu’s who have or will succumb to oblivion. And, they are not even at fault! It is us, educated middle and upper class idiots who are to blame. It is us, who brought this pandemic home to them.

So, it is also up to us to combat this…not just for ours but also their survival. So, maintain social distancing and respect the lockdown. There can be no hope unless we become the hope.

Sonal Singh
Everything around us has a story waiting to be told. Our stories live and breathe via the words that we speak or hear. Is it not so? The various situations that we encounter, the many incidents of every day, the people we meet, our conversations with them; all make life a melange of tales and anecdotes. And, that is what I attempt to capture through my writing.

It was a bitter winter night. A steady curtain of snow fell. The ensuing chill kissed the stone walls of the cottage and seeped...
Read more
Adventure

August 1940. They were a raggedly bunch of 10-year old lads, on the cusp of adolescence. The war made their families entrust them to the...
Read more
PoAttic-1

Be gone thou infernal cold

Come not near me; be gone thou infernal cold! I abhor thee with my weary bones, oh so old. Go! Cavort with the young and the...
Read more

“Hello, Sohini Madam?” “Yes, speaking. Who is it?” “Madam, this is Sameer from Big basket. I had brought your order.” “Oh yes, I have been expecting you....
Read more
Pandemic

When the wave arrived, it was gentle in its coming. The gentleness left one unprepared for what was to come. A being in its...
Read more
- Advertisment -

Life in a Fairytale

Much Ado About a Burp

A love letter to UniK-1 participants from Shankar Hosagoudar: First of all, a pat on the backs of those who participated in UniK-1, arguably one...
Read more

What to do & What not to do while participating in a Writing event.

Competitions are rough on writers. If we enter and don’t win, it’s very hard to shake off the feeling that our writing isn’t any...
Read more

Hello Artoons, Seeing a few comments about editing stories one has written, I thought I'd share my newly acquired...
Read more