by ratnaprabha 9 months ago5 months ago
3265views 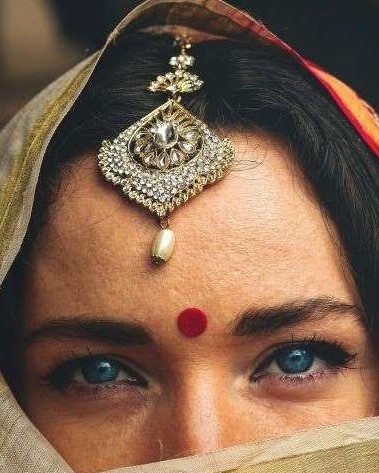 “Let go of my hand! I will walk on my own!” Draupadi’s piercing voice echoed through the large, luxurious court of Hastinapur. Dushasana’s ensuing deriding laughter made some of the people shudder and cringe uncomfortably.

In a couple of minutes, Dushasana promenaded into the court dragging her unceremoniously. She was dressed in a single garment, a sign she was menstruating. Dushasana dropped her near the Hastinapur throne, at the feet of Dhritarashtra, the blind Kuru King.

The shamed and embarrassed eldest daughter-in-law of the Kuru Clan raised herself from the floor, her eyes darting poisoned arrows at everyone assembled there.

“What is the meaning of this, O King? Don’t you see I’m not fit to make an appearance here? Have you forgotten I represent this family’s dignity and honour?”

Before the king or anyone else could answer, the eldest Kaurava, Duryodhana said mockingly, “Can you see your five husbands sitting with their heads hanging down, especially the first one, the great Yudhishtra? He wagered and lost everything he had including his kingdom, his wealth, his brothers, himself, and you in a dice game. You are now our slave!”

“Come and sit on my lap,” he continued, abruptly cutting off hesitant objections from the Kuru elders including Bhishma, Kripacharya, and Dronacharya. He leered lecherously at her and thumped his left hand on his left thigh close to his crotch. A few sniggers were heard.

Bheema and Arjuna, the second and third Pandava brothers, rose instantly, their faces red with anger directed at Duryodhana. But, they whimpered back to their seats when Yudhishtra stopped them. “We are bound by the rules of the game,” he whispered.

Draupadi’s face was crimson with livid rage. She hollered, “Have the Kuru elders left their sense of justice and propriety in their private rooms? Have my five husbands lost their manhood?”

No one answered. The deafening silence made her desperate.

“One final question! Did my husband lose me before or after he lost himself? If he lost himself first, what right did he have to wager me?” Bhishma’s eyes shed copious tears of guilt-ridden shame. But nothing more!

Emboldened by the silence, Duryodhana said, “Dushasana! Bring her to me but not before you rip her clothes out and she is completely naked!” Dushasana moved towards Draupadi who got herself into a foetal position, perhaps hoping to save what little dignity remained. Time stood still!

I had argued against the game of dice. “Warriors fight, win, and lose battles and wars on the battlefield, not by trivial games.”

And yet, I licked my lips as I watched her svelte, dusky body being dragged in, my groin tingling pleasurably as I imagined touching her smooth skin.

I resented her for stopping me from participating in her swayamvar because I was a sutputra. If only I had, she would’ve been my wife. Now she was with the Pandavas.

She was saying something. But I couldn’t hear her words. Her voice was lyrical. I was alone with her in a world where we loved each other. Everyone else was lost in a haze.

Why was Prime Minister Vidura walking off in a huff?

I jerked to reality when I heard her question, “Have my five husbands lost their manhood?”

The accumulated resentment simmering beneath exploded. “Women sleeping with five different men are called prostitutes in this kingdom!”

I regretted it instantly. Duryodhana, Dushasana, Uncle Shakuni, and many other Kauravas jeered and laughed aloud at my scathing remarks.

I only saw her staring at me, not with love but with anger.  I hated myself!

But my behaviour was favourable to Duryodhana, my only friend, the man who stood with me against the entire world?

Don’t I owe him my loyalty?

Should I go against the one who crowned me King of Anga, rendered royalty to my name, showered me with love and affection despite my humble origins, or rather, my unknown origins?

Wasn’t I just an abandoned child until he clothed me in Kshatriya respect?

Amid such confusing thoughts, I felt a strange kinship with Draupadi. Today, the pitiful thread of forlornness connected us. She looked as lonely as I had been all my life.

A cold chill filled my heart when Duryodhana ordered Dushasana to strip her. Now I must protest!

So what if she can’t be mine?

I love her, don’t I? Should my love be thus humiliated?

But should or shouldn’t I wager the happiness of my present family and loved ones for the sake of my unreciprocated love?

The conflicting thoughts made me immobile. Dushasana moved toward her to do his brother’s bidding.

As if driven by a sudden revelation she unravelled herself from the foetal position and got up. She stood erect, held her hands in prayer, her face turned heavenward and called out HIS name!

The aching voice that came from the depths of her being resonated throughout Hastinapur and beyond even as Dushasana began tugging at the loose end of her garment.

Then the magic happened!

I stood dumbfounded, watching the scene. Draupadi circumambulated in the same spot, her eyes closed, hands joined together in prayer. Dushasana pulled her garment. But her nakedness was never revealed. New fabric magically replaced the one he removed.

In a matter of minutes, a huge pile of clothes lay next to the sweating and fatigued Dushasana. And she was still covered in her single cloth, her honour intact.

HE had come to her aid when the world stood by helplessly. HE must be Lord Vishnu!

Suddenly I realised that the Kauravas and all those who stood on their side today, silently or otherwise, are going to pay a heavy price! Me too!

Still, I will not leave Duryodhana’s side until my death. I had made my choice a long time ago, years before I realised I had thrown myself into a labyrinth of family and political intrigue.

Sutputra – the son of a charioteer.

Kshatriya – warrior or warrior clan, higher than a sutputra in the social hierarchy.