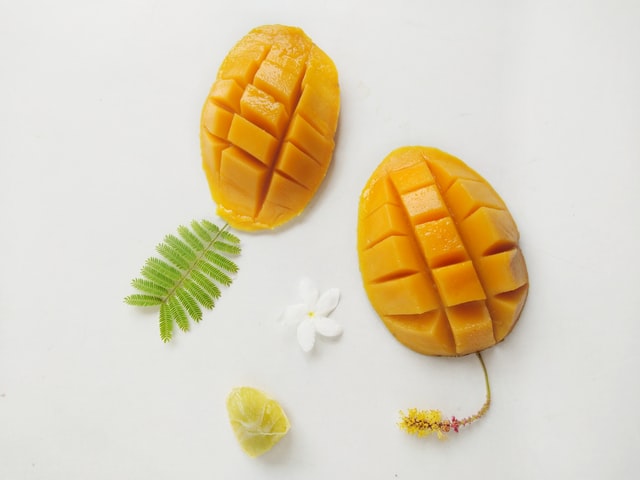 My name is Alphonso…Alfie Alphonso. I grew up in the backyard of an old couple, the Daniels’s. Mrs. Daniels is extremely fond of our tribe. She would come around every afternoon and evening. With her index pointed at each one of us, mutter something to herself and go back. If she had her way, she would have had me and my abode right in the middle of their garden with no public reach. But that was not to be. I hear Mr. Daniels was not careful enough when he planted the sapling. The result was some of us hung across the wall onto the Mishra’s.

The Mishra’s were no less. Tales have it that years ago, their son ate a mango and threw the seed carelessly in the garden. Bless the boy! If not for him, I would not have ever met my Kesar…Kaycee Kesar.

I have heard Mrs. Daniels whisper to Mr. Daniels, ‘The Mishra’s stole all our Alphonso’s last year, look what happened to their produce this year. Not even half as many on theirs as ours.’

‘Darling, that was not stealing. It’s not their fault if some of ours fell on their side. Didn’t they say later, they mistook them for their own?’

‘Huh…mistake, my foot. How difficult is it to tell the variety from the look? Anyways I am better prepared this season. I have been keeping a count of my Alphonso’s. Will not let even one cross over.’

‘Keeping a count?’ A surprised Mr. Daniels looked up at the tree.

‘Oh yes of course. Does she ever share her Kesars? Instead she would mock me with a glass of mango lassi on her balcony, purposefully raising her voice, so I hear how delicious they are. And do you remember when she said it was a mistake, she did not miss to add how sour my Alphonso’s were.’

‘Well…but she is right. Ours are a sour lot.’ Mr. Daniels said in a hushed voice.

The Daniels were hardly done when the Mishra’s sat down for tea on their balcony.

‘Look at the obsessed lady, she must be talking about mangoes again. Our Kesar’s might be fewer but definitely firmer and sweeter,’ said Mrs. Mishra.

‘No sooner the buds appear, you both get started,’ replied Mr. Mishra with a smile on his face.

While both the couples engaged in their own small talk on either side, I stole a glance at Kaycee. She was swinging in the evening breeze. Did she just blush or was it her natural colour reflecting against the setting rays of sun?

I sent some sweet nothings to her via the wind that brushed past me and went her way. I shall now wait for the direction of wind to reverse for her reply. If only we could be together. But this wall and the rival ladies on either side of the wall stood as guards against it.

It was almost about time for us to be harvested. Going by the fixation of Mrs. Daniels, she would not wait until we just dropped off.

As I was waiting for the doom’s day, soaking in the light drizzle that evening, I looked at her. She was ripe and ready. So was I.

It was unusual to spot Mrs. Daniels under the tree with an umbrella in hand at that hour. She pointed a beam of light at me from under the umbrella and screamed at top of her voice. ‘I do not feel good about the weather. We should have plucked them today. ‘

Mr. Daniels replied from the safe cover of their porch, ‘Get in now. I will take care of them tomorrow morning. I hope the wall survives the wind. It was due for a repair.’

The Mishra’s had walked onto their balcony. ‘This weather is such a respite from the scorching heat over the past few days.’ Said Mr. Mishra.

‘A respite for sure. But it is a threat to the mangoes. Let us get them plucked tomorrow before the winds get any stronger.’ Said Mrs. Mishra.

It was getting darker. The light drizzle from the early evening was a downpour now. In the pitter patter of the raindrops, I sent my last message across. ‘My dear Kaycee, this could be the last of our correspondence. There is a storm coming and few hours from now we shall both be plucked and, on our way, to slices and lassi’s. I shall be back next season, so will you. Until then …’

Breaking my train of thoughts, the wind gushed past as if in a hurry. Since my conception I hadn’t seen it move this fast. I could not even say the thing the Mr. Daniels whispers to Mrs. Daniels sometimes. So does Mrs. Mishra to Mr. Mishra. And every time I heard it, I forgot about all the bitterness that goes across the wall. I had wished to tell that to my Kaycee one time before it all comes to an end. But this wind …ugh!

The wind was getting stronger. The branch I was on, creaked and hung further down on to the Mishra’s side, leaving me swinging just above the wall, moving like a pendulum across it. Until it was difficult to hang on anymore.

‘Hurry up! Over here. See what has befallen my Alphonso’s.’ Mrs. Daniels hoarse wailing jolted me up.

Mrs. Mishra came running around too.

Unable to bear the weight of broken branches, the wall laid broken. I was on the ground, my family strewn around. ‘Alfie,’ a familiar nudge made me turn aside.

‘Kaycee!’ I gathered the last juices of my strength and rolled closer to her.

The two ladies frantically searched for their own tribe, crossing over the non-existent wall. We both were so battered and spoilt, none wanted to pick us up.

We lay there in tranquility. The footsteps pushing us further down the wet soil.

Afterall not all storms come to disrupt your life, some come to clear them up.

Author’s note: Alphonso and Kesar are two of the extremely popular varieties of Mangoes. While the former is called the King of Mangoes, the latter is referred to as the Queen of Mangoes.