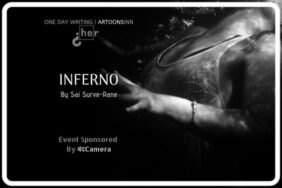 Troubled and tortured woke he,

By the trace of a memory,

A drag he felt in his heart,

He struggled to remember the start

Levelled every trench and tor,

He survived an apocalypse,

Hope sank in a dark eclipse.

Do I venture another stride?

What remained to see outside?

And Dante spoke in his ear,

All hope abandon, who enter here.

A stronger future they willed,

All weaknesses were forgot,

They were always a resourceful lot.

The means of living were meagre,

For immortality they were eager,

For society they care did not,

They were also the meanest lot.

Their dogma was very simple,

For those few the means were ample,

Eternal was their duration.

And thus it happened to come by,

With females did feminity die,

A celebration of masculine splendor,

Who needs the weaker gender?

They were freed of the mortal bondage,

Could regrow or print an appendage,

They had vanquished all disease

And had ages to do as they please.

They were creators cognoscenti,

A utopia their vision,

Equipped with every provision.

How surroundings were made to adapt.

The brotherhood thus did flourish,

Complacence and pride did nourish,

Patience and prudence be blowed.

For they couldn’t correct one flaw,

That governed their life’s law,

A gene in their possession,

There remained that one he,

Haunted by a memory,

A paradox of speaking silence,

Of frailty and resilience.

Every moment on vigil,

Looking for his Virgil,

Seek what the war had cost,

In a quest for a Paradise lost.

The shadow of more wars loomed,

Their being consequentially doomed,

Mere shades, departed without Her.

**We appreciate your rating the story out of 10 at Writers and Readers’ Room | ArtoonsInn. This story is an entry for the one day event, HER, co – sponsored by BandCamera.

BandCamera : Here is BEER for you – A short film with 10% ALCOHOLIC content. It will surely give you a kick at the end.

Do share it with your sober and not-so-drunk friends.
Drive safe.

Nostalgia has a way of glossing over the tediousness of school hours, leaving sweet, sepia toned memories of one’s alma mater. Eckleton was no...
Read more
PoAttic-1

How deceptively pink was that one winter chill, How comfortingly  warm your touch was then. Now the chill's set deep within the hearts, Cold, dismal, distant, a...
Read more
Fiction

The rocking-chair next to the window, a perfectly placed antique beauty, charmed him. He ignored the coppery-odour in the attic. In an instant, he...
Read more
Fiction

The Lady In the Villa

“ The amount is not negotiable ,” the lady declared vehemently. “ Take it or leave it.”      I stared at her with puckered brows.  There...
Read more
Fiction

David noticed the tiny advertisement in a local newspaper and on a whim, he circled it. As the evening sun sprawled its crimson rays with...
Read more
- Advertisment -

As the Yellow Stars Fade Away

“What’s up mom?” Tana smiled and looked at her. She smiled and responded, “I’ve just finished my evening prayers.” “Good, let’s prepare dinner, come help me.”  Her...
Read more

"Sit quietly!" I said, "Giggling? You idiot." It was Bablu this time. The most notorious of them all. To mind a class of forty...
Read more